This week I edited my flash piece, HOMECOMING, based on CP (critique partner) feedback. While I didn't agree with everything from the handful of critiques I received, I did stop and look at what each comment could signify. While some of the suggested fixes wouldn't work for any number of reasons (largely word count restrictions), I made sure to pause and really look at each instance to see if I could figure out what made them stop reading and how I could fix it.

*scroll down for the Updated Draft Three*

While I did have more than two writers critique my story, here are the comments from my two selected critique partners. A big THANK YOU to both David and Tyler for their comments (click on their links to find out more about their stories). See below for what they had to say about my 2nd draft. 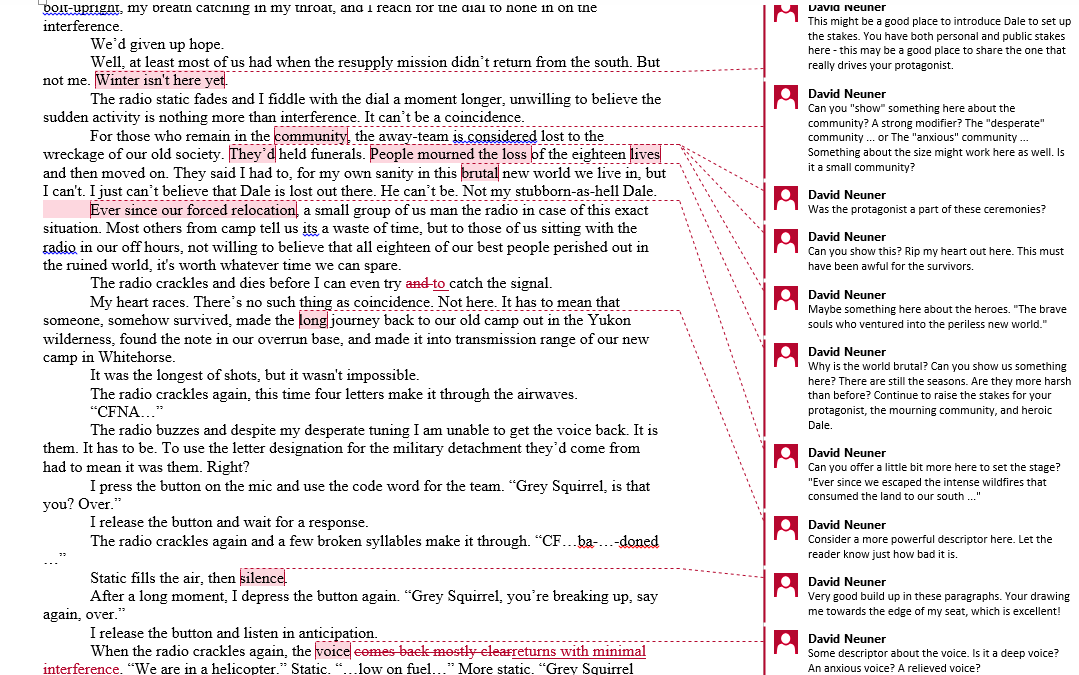 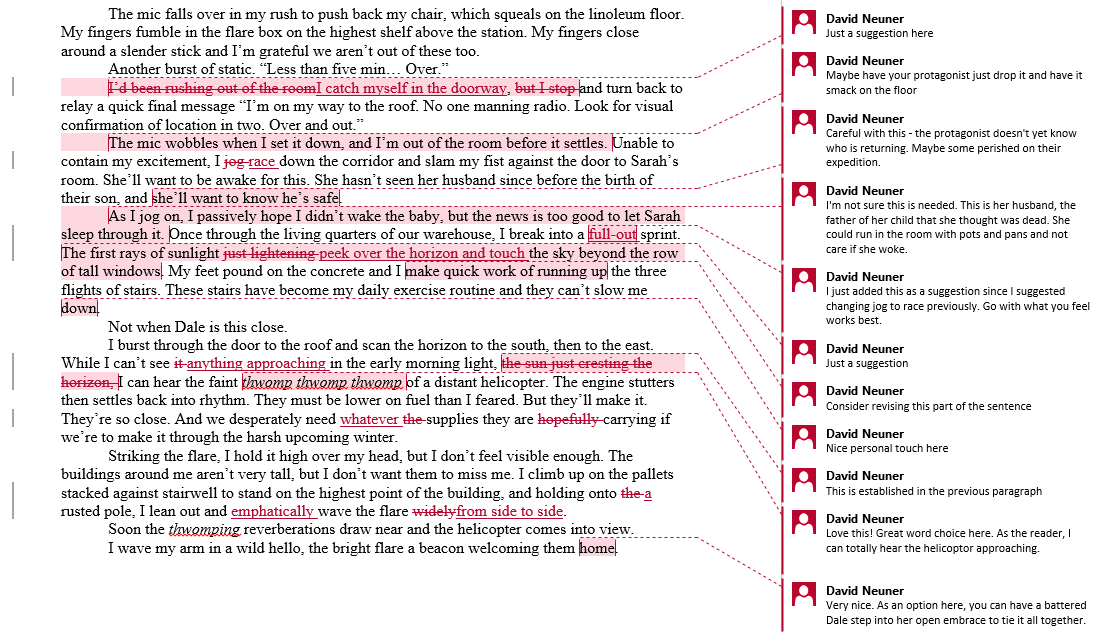 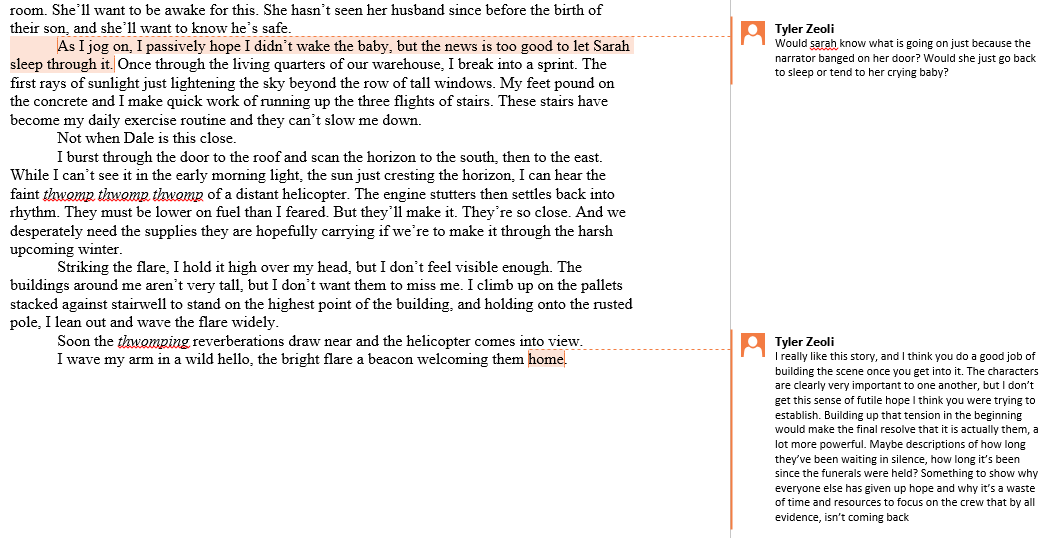 Both David and Tyler were more than fair in their critiques, and using their notes along with the others, I was able to edit my way through to this next revision. Thank you to everyone who helped me out with a critique. Everyone of you helped shape this story and I appreciate your time and words.

The radio crackles, speakers buzzing to life for the first time in eighty-six days. I sit bolt upright, my breath catching in my throat, and I reach for the dial to hone in on the interference.

We’d given up hope.

Well, most of us had when the resupply mission didn’t return. But not me. A month and a half late doesn’t mean they’re all dead. Dale’s still out there. He has to be. He knows we won’t survive the winter without a decent scavenge and he promised he’d make it home no matter what.

The radio static fades and I fiddle with the dial a moment longer, unwilling to believe the sudden activity is nothing more than interference. It can’t be a coincidence.

After the base was overrun last month, the Leaders declared the away-team lost to the wreckage of our old society. They presumed our best eighteen people, if they made it back north alive, wouldn’t be able to find the message left at the overrun base, let alone track us to our new location twenty-four kilometers away.

But I refuse to accept their deaths, even after the funerals. Of course, I mourned those lost at base the morning we were forced to flee the incursion, but I refuse to believe the brutal new world we live in took Dale from me.

The radio crackles and dies before I can even try to catch the signal.

My heart races. There’s no such thing as coincidence. Not out here. Not anymore.

It has to mean someone, somehow survived the trip south, made the perilous journey back to our old camp in the Yukon wilderness, found the note in our still-overrun base, and made it into transmission range of our new camp in Whitehorse. It was the longest of shots, but it wasn't impossible. Not for my stubborn-as-hell Dale.

The radio crackles again, this time four letters make it through the airwaves.

The radio buzzes and despite my desperate tuning I am unable to get the voice back. It’s them. To use the letter designation for the military detachment they’d come from had to mean it was them. Right?

I press the button on the mic and use the code word for the team. “Grey Squirrel, is that you? Over.”

I release the button and wait for a response.

The radio crackles and a few broken syllables make it through. “CF…ba-…-doned …-veru…”

Static fills the air, then silence.

After a long moment, I depress the button again. “Grey Squirrel, you’re breaking up, say again, over.”

I release the button and listen in anticipation.

When the radio crackles again, the male voice is mostly clear. “We are in a helicopter.” Static. “…low on fuel…” More static. “Grey Squirrel coming home if we can fin...” A final burst of static. “Just on the outskirts of Whitehorse. Over.”

My heart leaps in my chest. I recognize the voice. “Dale? Is that you? Over.”

“Yes… no time…need location… fumes. Over.”

“I have to go to the roof.” I shout into the mic. “Look for a flare. I’ll be waiting, on the roof of the white building near the river.”

The mic falls over in my rush to push back my chair; the rubber stoppers squeal on the linoleum floor. My fingers fumble in the flare box on the highest shelf, closing around a slender stick and I’m grateful we aren’t out of these too.

I dash toward the door.

Another burst of static. “Less than five min… Over.”

Skidding to a stop, I turn back to relay a quick final message “I’m on my way to the roof. No one manning radio. Look for visual confirmation of location in two. Over and out.”

The mic wobbles when I set it down, but I’m out of the room before it settles. Unable to contain my excitement, I sprint down the corridor. I want to shout for everyone to wake up, that they’ve come home, but I think twice before waking people. I don’t know who exactly is all in the helicopter. The team didn’t leave with a helicopter, returning in one is a surprise, but Dale knows how to fly from his time in the Canadian Airforce, so I guess not unexpected.

Once through the living quarters of our warehouse and into the open expanse, I break into a full-out run. The high windows of the warehouse reveal the first rays of sunlight just lightening the sky beyond. My feet pound on the concrete and I make quick work of running up the three flights of stairs. These stairs have become my daily exercise routine and they can’t slow me down.

Not when Dale is this close.

I burst through the door to the roof and scan the horizon to the south, then to the east. While I can’t see much in the early morning light, the sun just cresting the horizon, I can hear the faint thwomp thwomp thwomp of a distant helicopter. The engine stutters then settles back into rhythm. They must be lower on fuel than I feared. But they’ll make it. They’re so close. And we desperately need whatever supplies they are carrying if we’re to make it through the harsh, upcoming winter.

Striking the flare, I hold it high over my head, but I don’t feel visible enough. The buildings around me aren’t very tall, but I don’t want them to miss me. I climb up on the pallets stacked against stairwell to stand on the highest point of the building, and holding onto a rusted pole, I lean out and wave the flare wildly.

Soon the thwomping reverberations draw near and the helicopter comes into view.

I wave my arm in a wild hello, the bright flare a beacon welcoming them home.

C.M. Fick is a writer from British Colombia, Canada. She's recently finished her 6th ms titled #GreenDeath, launched QueryConnection (a forum for querying writers to workshop their query letters), and is also a co-host and admin for the Twitter event #Write4Life.

When she's not writing, managing forum business, or networking with other writers, she's running around after a 5 year old who rules her life.

This is her first Writer-In-Motion.

Some other other fun facts: